‘He who cannot draw on three thousand years is living from hand to mouth.’ 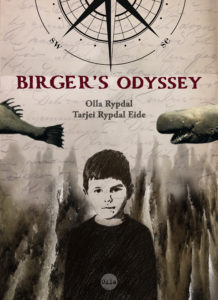 For as long as the first human beings have existed on Earth, we have told each other stories of Earth’s creation; stories of how elements and incidents of nature could be explained by fights between heroes and monsters, stories about the fight between evil and good forces.

Through time, the number of stories has increased. We wonder what may exist in the sea, in the air, on and inside the planet Earth, in the ice, beneath the ice…

Most of this is explainable, but fiction is lifting our thoughts and dreams.

At the same time, science and research discover traces from ancient people and animals. We may learn something about how our ancestors took care of nature and Earth. Could it be that knowledge of past times might be useful today, to help us taking care of the Earth?

We no longer fully believe in old stories passed on to us, they cannot explain everything. Our fantasy, however, needs these stories to find new paths – paths to help us care for everything in nature, both inside and outside this one planet Earth on which we live.

In this book, we get to meet Birger. He likes stories. The scientific story of man, of our Earth and everything that lives, and has lived – but also the exciting stories told by our ancestors to explain how everything was mutually linked together.

Approximately 3000 years ago, a poet named Homer was said to live in Greece. He collected contemporary myths and stories, some of which he retold in his book about Odysseus and his journey home from the Trojan War. Since this book became very famous, the word

Odyssey has become a synonym to a long journey.

Birger is also familiar with this story because he has heard it from his parents. They have also told him about Birger’s great-great-grandfather, Ole. He was a machinist on a whaling ship, and almost a hundred years ago, he went whaling in the Southern Ocean.

In Birger’s Odyssey, Birger is the one heading for a long journey. Before he leaves together with his parents, he finds the whaling diary that his great-great-grandfather Ole wrote when he was in the Southern Ocean.

In Antarctica, Birger gets to experience research and science linked to the Earth and the ice. At the same time, he is reading about the whaling adventures of his great-great-grandfather Ole. Birger is also writing his very own book about his personal imaginary Odyssey.

From the chapter«Hidden in the ice»:

«…Birger stops. There is still quite a distance to walk before they reach the mouth of one of the biggest caves in the mountain area. Something in the ice catches his eye. It looks like an item that is frozen into the ice. Could it be a knife? Birger takes his own knife and starts picking and scraping. He completely forgets everything. He really wants to find out what this might be. Finally, he has removed enough of the ice and he grabs the item. He was right; it is a knife! The blade is rusty, dark and spotted. The knife shaft seems yellowish-white. It looks as if it has been cut out of a piece of bone. Could it be a whale tooth? Birger puts both his own knife and the other one in his backpack. Now he has to hurry after the others.

But which way did they take? He has completely lost track of time – and now he cannot see the others – nor hear them!

‘Richard!’ he shouts. ‘Mathias!’ he shouts even louder. No one answers. Birger looks around. The ice is shiny and hard, thus making it impossible to see their footprints. However, there seem to be some tiny holes in the ice. Crampons must have made them, Birger thinks, and he starts walking.

He hurries, and starts running to catch the others. He does not pay attention, and suddenly he feels like being in thin air! Everything gets dark around him, and he stumbles. His ears are ringing, or is it another sound? Is the sound within his head – or outside? » 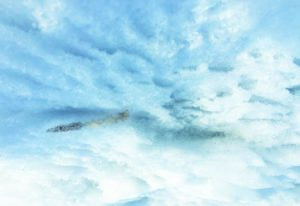